Yesterday I and two of my friends bought three Samsung SSD RBX Series 64GB solid-state drives for $130 each from a Dell laptop dealer. These fine SLC SSDs were disassembled from brand new Dell Latitude E Series laptops requested by stupid customers who preferred a 500GB slow, noisy, heavy, and power-hungry HDD over an agile, silent, light, and green SSD. All manufactured on 5/23/2008, the three of them revealed “Power On Hours Count” of less than 10 in HD Tune Pro. Dell OEM labeled MCCOE64G5MPP-0VAD1, they shockingly had around 40 reallocated sectors each, showing us how immature the SSD technology is, albeit for the moment. 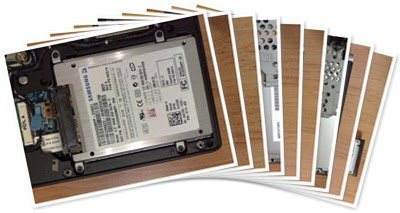 Computers needing surgery were my Dell XPS M1330, and my friends’ Dell Studio XPS 13 (1340) and Sony VAIO VGN-SZ650N. To preserve Dell/Sony recovery partitions and also our existing operating systems for the purpose of an accurate benchmark comparison between before and after the SSD replacement, I used “Acronis Rescue Media” bootable CD’s “Acronis True Image” to clone every laptop’s HDD into each SSD with the HDD still installed inside the laptop and its own Samsung MCCOE64G5MPP-0VA SSD hooked up with a SATA/USB converter. Then the three hard disk drives were replaced by the solid-state drives respectively, but out of the ordinary, Windows failed to start on all three machines, with both Dells operating Windows 7 Ultimate 64-bit build 7100, and the Sony operating Windows Vista Business 32-bit Service Pack 2, showing the following error message:

Windows failed to start. A recent hardware or software change might be the cause. To fix the problem:

1. Insert your Windows installation disc and restart your computer.
2. Choose your language settings, and then click “Next.”
3. Click “Repair your computer.”

If you do not have this disc, contact your system administrator or computer manufacturer for assistance.

Status: 0xc000000f
Info: The boot selection failed because a required device is inaccessible.

For the Sony VAIO, operating Windows Vista Business 32-bit Service Pack 2, a simple try of the ERD Commander 6 bootable CD fixed the problem. Now the Dell laptops operating Windows 7 Ultimate 64-bit build 7100 looked different. So I tried booting them with Windows 7 Ultimate 64-bit build 7100 installation DVD. When it started “Install Windows,” I clicked “Next,” then clicked “Repair you computer,” and waited for the System Recovery to find my Windows installation. After a while, a dialog box was shown, displaying “Windows found problems with your computer’s startup options.” It was asking “Do you want to apply repairs and restart your computer?” I clicked “Repair and restart.” This fixed both Dell laptops’ SSD startup problem.

Dell says the firmware upgrade reduces potential issues due to power mode transitions and improves internal error handling. This firmware will decrease the possibility of the drive not being detected and system hanging. The problem is Dell’s R214180 firmware upgrade doesn’t end up in a proper bootable CD once extracted for the moment. So I uploaded the fixed ISO file for making a Samsung 2.5 S2 RBX SSD PS105D15 firmware update bootable CD onto my SkyDrive.

My Dell XPS M1330 and Mohammadreza’s Sony VAIO VGN-SZ650N managed to upgrade their Samsung SSD RBX Series 64GB flawlessly, while Farshad’s Dell Studio XPS 13 failed right when Samsung ACube was trying to patch the drive with PS105D15.bin. Thanks to Samsung ACube programmers, Farshad’s SSD didn’t become a brick, and I managed to re-flash it in my Dell XPS M1330. What astonished us was Samsung’s trick in hiding ID 05 aka “Reallocated Sector Count” out of HD Tune Pro’s health status. ID 0C aka “Power Cycle Count” was reset, and ID 09 aka “Power On Hours Count” was also foolishly set to 1, making someone willing to buy a firmware-upgraded Samsung RBX solid-state drive unable to determine the exact amount of time the drive has been working, or how many reallocated sectors it has replaced so far.

The following table shows the three laptops’ configuration, and their accurate boot up benchmark, before and after the SSD installation:

After a fresh install of Windows 7 Ultimate x86 Build 7600 onto my Dell XPS M1330—now equipped with an SLC Samsung SSD RBX Series 64GB—it boots up in less than 28 seconds (7.03, 20.74, 23.14, 27.72) from off state, twice faster than when it was using an HDD, also its disk data transfer rate assessed by Windows Experience Index has jumped to 6.2. The same measure’s jumped from 4.6 to 5.9 in the VAIO—now SSD-equipped—operating its OEM Windows Vista x86. Now all three laptops are faster, lighter, quieter, and their batteries last longer, but there’s also an unsought side-effect to this amazing SSD experience. Because the lazy HDD is now replaced with the agile SLC SSD, system’s bottleneck point is removed, causing CPU not to have enough time to idle (read rest and cool down), so laptop’s cooling fan needs to overwork!