Last night, my brother bought our forth SSD—another Samsung SSD RBX Series 64GB MCCOE64G5MPP-0VAD1 SLC solid-state drive, disassembled from a Dell Latitude E Series—for $130. Having bought three of the same Samsung SSDs about a week ago from the same shop, the Dell dealer joked with my brother asking “do you have a research lab?!” 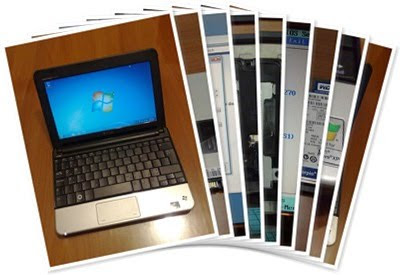 The first step was to patch Samsung MCCOE64G5MPP-0VA SSD with the PS105D15 firmware update (dated 3/25/2009) using my PC. Now that the SSD’s firmware is patched successfully, it’s time to view Mini 10v’s service manual, to know how to get into Mini 10v’s assembly safe and sound. Please note the Serial ATA controller in Dell Mini 10 doesn’t operate in SATA II mode, so you’ll see the SSD is detected as a SATA1 disk in Mini 10’s BIOS.

To install Windows on netbooks lacking DVD drive, the best practice is to prepare an external HDD having a few gigabytes of free space. Then you need to make an active FAT32 partition somewhere on the external USB hard disk drive, and copy the entire contents of your bootable Windows installation CD/DVD into the FAT32 active partition. Please note there’s no necessity for the active FAT32 partition to be the first partition. It can be the only partition on the disk, located somewhere between other partitions, or even the last partition on your USB portable HDD.

To clone recovery and OS partitions, I used “Acronis True Image Home 2010”, which I’m happy to announce is much faster, user-friendlier, and stabler than its previous version included in “Acronis Rescue Media” bootable CD. My tests also show not only it operates more supportive over AHCI, but cloning Windows 7 partitions between HDDs and SSDs, it doesn’t cause the “boot selection fail” with status 0xc000000f problem noticed before as “Windows failed to start. A recent hardware or software change might be the cause.”

Having allocated a total of 251MB graphics memory, Windows 7 enables it to sport better graphics comparing to its original Windows XP. Now it plays wide full-HD (1920×1080) DivX/Xvid AVI videos with bitrates as high as 6Mbps without getting out of sync. Tried an 8Mbps Xvid HD video in Media Player Classic – Home Cinema, but after a few moments it got out of sync. Matroska video containers require more processing comparing to DivX/Xvid AVIs while being decoded, so I believe it’ll jitter playing an MKV sooner than a high-bitrate DivX/Xvid AVI.