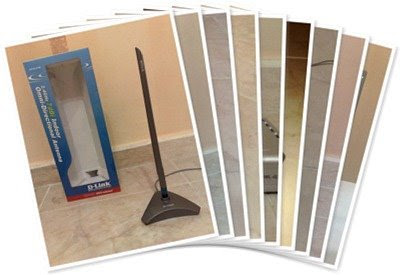 Wireless signal strength has always been a big challenge inside houses and small offices. Putting the obstacles aside, the coverage depends on how strong both the transmitting access point and the receiving handheld are.

Where I performed the test, three stories of less than a thousand square feet each, a D-Link DWL-G700AP wireless access point is installed in the 1st floor, secured via both WEP 128-bit and MAC-filtering, sharing the network to different portables, including my Nokia N95 8GB (RM-320) and Dell XPS M1330.

It’s a 7 dBi indoor omni-directional antenna which should increase the effective wireless operation range of 802.11b and 802.11g devices. It works with wireless access points, wireless routers, and wireless PCI adapters to improve signals in omni direction (360 degrees) and to provide point to multi-point coverage. It can be attached to wireless networking devices equipped with RP SMA (small) or RP TNC (big) connectors.

Comparing to the access point’s standard antenna, I didn’t notice a improvement when the antenna kit was attached to the access point with the provided cable. Was it the most disappointing $30 purchase I’ve ever done, or was I doing something wrong?

Because a cable loss (2.1 dB in this case) was obvious, I tried disassembling the big antenna from its base, and then attached it directly to the access point. This time signal was obviously stronger, but it wasn’t what I predicted at all, comparing to when the AP was working with its primary small antenna attached. It’s a disappointment knowing that the antenna kit (combined with the base and cable) is somewhat useless. I also tried different channels, but it didn’t improve the range, except for lower channels conflicting with neighbor’s Panasonic cordless phones, which has always been annoying.

Maybe the access point, DWL-G700AP in this case, is not powerful enough to pump strong signals to the big antenna, but I’m disappointed, I do not recommend this improvement kit. It isn’t worth the $30 paid price, especially when the magnetic base and the extension cable are useless. Parts making more than half of that price will be resting in the hardware closet in the basement for the rest of their lives.

The product has a collinear antenna structure, and comes with a reverse SMA plug attached to a 1.5 m gray RG-178 50 ohm cable which according to the specifications results a 2.1 dB loss @ 2.45 GHz. The frequency range is from 2.4 GHz to 2.5 GHz with a maximum of 1.92 VSWR on 50 ohm normal impedance. The peak gain without cable loss should be 7 dBi on a 1 Watt admitted power. Finally it covers 24 degrees of e-plane and a full 360 degrees of h-plane, requiring a 2.4 GHz 802.11b/g networking device with detachable RP SMA or RP TNC connector.